Maranasati and the Female Form

The Death of a Noble Lady… is similar to a series called Body of a Courtesan in Nine Stages of Decomposition, c. 1870. by Kobayashi Eitaku – both examples of the Japanese art of kusôzu (images specifically portraying the nine stages of decay. There is also corresponding poetry: kusôkanshi)…. You can see pictures of all stages of decomposition as well as the curator’s note on their website and, if you’re interested, all nine stages are (loosely): recent death, bloating, rupture, putrefaction, consumption by animals, discolouration, dissolution of the flesh, fragmentation of the bones, and complete disintegration. 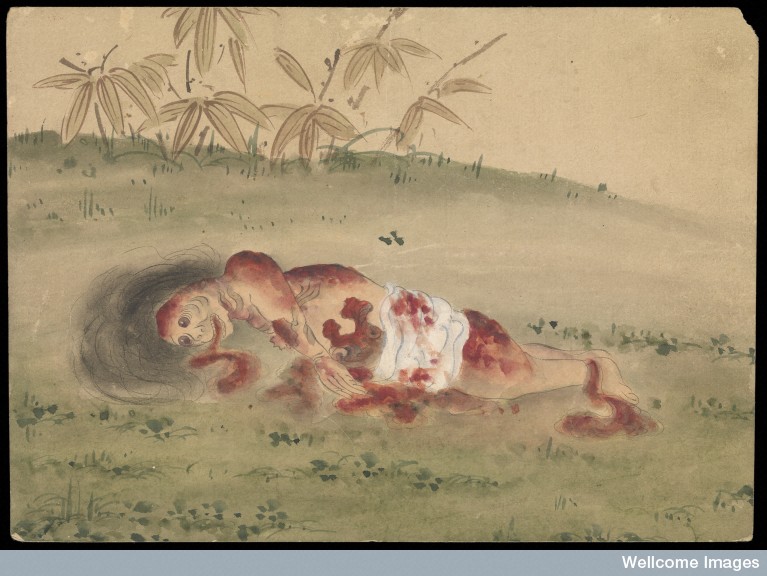 The Death of a Noble Lady and the Decay of her Body. Komachi Ono.

Kusôzu are related to the Buddhist practice of Maranasati, the contemplation of death. Traditionally this practice can get a bit gnarly–you’re supposed to look at images of decay in order to get comfortable with the idea, or at least to accept the idea (I’m not sure “comfort” is the goal of any Buddhist practice). The use of the female form might be a way to make the contemplation a little more palatable to those Male Gazers, either through sexualizing the corpse or by rendering it “other.”

As Valentine points out, this isn’t such a long walk from Western images of Death and the Maiden, or the pre-Raphaelite rash of dead Ophelias. Though, for my money, it’s hard to imagine Millais painting a realistic drowning victim, and harder still to imagine the image on every liberal arts dorm room in America. We like to sanitize and beautify. Somewhere in our history, we’ve hidden the actual body and replaced it with a plaster mask, a fairy image.

Sometimes I think that’s why the more exploitative true crime narratives are so popular; they’re a way for us to engage with the more gruesome aspects of death while still asserting our moral superiority. We can regard the violent death and dismemberment–usually of women–from a stance of the upright judging the dirty and the depraved. But rather than the mindful contemplation of mortality encouraged by the practice of Maranasati, this much guiltier pleasure cultivates a sense of horror associated with the corpse. We’re all curious about death, about bodies and decomposition, but when we’ve sanitized our images of death so much, the satisfaction of that curiosity is primarily fulfilled by victims of terrible violence. There’s no room for peace or acceptance; instead, the body becomes a source of fear and revulsion.

(Full disclaimer: I have read a lot of true crime. The pot is not calling anyone else black, here.)